My current customer is planning to fully use vRealize Automation for deploying VMs, something I can only encourage. As they are hardcore into developing their own software and applications for their customers, they expect to deploy 30 to 40 VMs every week. Some of which for a long period of time others will be deleted within days. As developing software and applications is their core business, the management team has dictated that there should be no limitations to the amount of resources they can claim. So all the resources are made available to 1 tenant with 3 business groups. Of course there should be some sort of capacity management. That’s where my assignment is coming from. I’ve been asked to create a dashboard which instantly will show which user has claimed the most resources. As there could be a valid reason (large project or so) I’ve also added the reclaimable resources. The operations team wants to see this in a table form, like this:

I didn’t get it 100% like the above table. But I was able to get the requested output. So here is how I achieved it.

As this is not such a large company I was able to pull it off with creating an environment for every user. 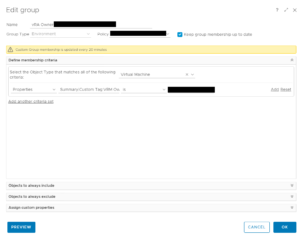 One thing to note here is, that vRA adds the “VRM Owner” attribute to vCenter as a custom vSphere attribute. Without the VRM Owner there is no tracing which user deployed which VM.

The second step is to create a view. Mine looks like this:

The third and final step is to create a dashboard. I used the scoreboard widget. Select all the environments created during step 1 as “input data”. Set “output data” to object type “Environment” and select metric “Population|PopulationTotalCount”.

Next add the view widget to the dashboard and select the view creating during step 2.

Then you should end with a dashboard like this:

The left widget shows for each user how many VMs they have deployed. After selecting a user from the left widget, the right view widget is populated with resource information.

And that’s how the operation team now can track user claimed resources.